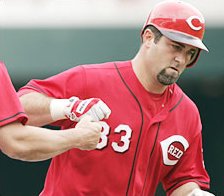 A long day of sitting in front of the computer, reloading Mr. Lancaster's blog has finally yielded the tidbit we've all been waiting for:

Rich Aurilia will be back with the Reds this season. He agreed tonight to a one-year, $1.3 million deal that also carries a mutual option for 2007 at $2 million. Not sure about a buyout.

That's a pretty good rate for the Reds, considering the market. Now we'll see if the roster stays put or this is a precursor to another deal.

I'm mildly surprised that Aurilia landed with the Reds again. When the Cardinals snapped up Junior Spivey for $1.2 million, it seemed like the market might have been stronger for Aurilia. Plus, the Reds infield is getting awfully crowded.

But I'm not complaining. I like Aurilia. And with Ryan Freel's shenanigans early this morning, the Reds might be glad to have the additional flexibility.

Posted in Wheeling and Dealing.
Comments Off on Rich Aurilia to be a Red in 2006

Ryan Freel was arrested early this morning in Tampa and charged with disorderly intoxication. I don't have any further details about what happened quite yet, but Freel was released on $250 bond at 11:05 a.m. today, seven and a half hours after the arrest time.

Of course you want to reserve judgment until you know all the details. But damn, boy!

UPDATE: The Official Reds Site has some additional information.

Am I the only one who couldn't satisfactorily sleep in this morning because I was worrying that I might miss the big Aurilia signing?

Anyway, while you're waiting for the Reds to do something interesting, you can head over to BaseballGeeks.com and check out their first podcast. Around 15 minutes in, you'll be treated to a 10-second promo for Red Hot Mama.

Posted in Random Ramblings.
Comments Off on RHM Ad on BaseballGeeks.com