The story Kearns maintaining focus in the Cincinnati Enquirer today talks a little about how Austin Kearns, everyone's favorite non-liabilty in the outfield, got married this off-season. Austin and his new wife Abby had their first child, Aubrey Ryan, in September. It's nice to know that alliteration in naming children is alive and well with today's young couples.

Congratulations to the whole Kearns family from an only-slightly-disappointed RHM.

Posted in Random Ramblings.
Comments Off on Kearns Gets Married

Tired of Dunn’s Hands Yet? 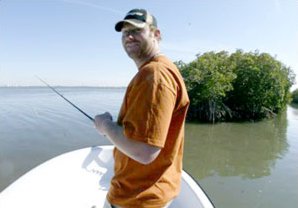 No? Great! 'Cause there's yet more to say about them. According to Dunn's hand not a worry in the Cincinnati Post today, the Reds medical staff was shocked to read reports that Mr. Dunn's hand was still causing him pain. They frantically called around to check in on their slugger. He's not in pain, he told them. That medical advice about wearing a splint that he so casually dismissed? It was just his buddy who happens to be an orthopedist. Dunn couldn't be reached for further comment.

It's a lot of crap, so I'm going to cut through the baloney for you and give you my interpretation. Get ready for some truth.

Friday at the Dayton Agonis Club meeting, some guy was being kind of a jerk and ragging on Dunn for being a lazy ox. Jerry Narron knows Dunn's not as much of a slacker as he looks like in those baggy pajama pants he wears, and so uses the broken hand bit to prove a point about what a trooper he is.

Meanwhile, Hal McCoy sniffs a bit of a scandal and gets Dunn on the horn. “Heard you're so tough you can play with a broken hand,” he says, awe in his voice.

“Yeah, it hurts a might,” Dunn says in a cowboy drawl. “Doc told me to take care of it, but splints is for women-folk.”

The story breaks and all of Cincinnati fandom shrieks, “those hands are worth $8 million!” The Reds, in a bit of a panic, say real quick that Dunn's fine, always has been fine, and come off looking just a skosh desperate to cover up a big story.

But it's not a big story. The hand was probably broken and is mostly healed now, and there's not much more you could do about it anyway. It probably aches a little and will cause him fits during thunderstorms when he's 65, but in the short term that tiny little ache will be drowned out by the third day of spring training.

Meanwhile, Narron's keeping his mouth shut and Dunn's turned off his phone because they didn't think they said anything wrong to begin with and they don't want to make it worse.

Sound about right? OK, then let's forget about it already. There's much more important stuff going on anyway. Austin Kearns got married.

Posted in Random Ramblings.
Comments Off on Tired of Dunn’s Hands Yet?