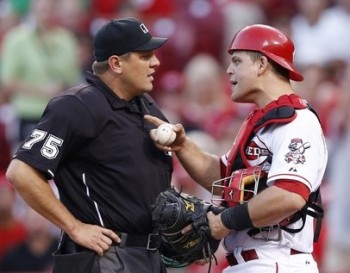 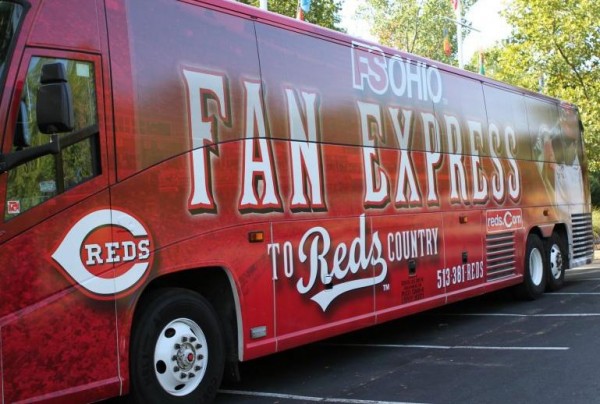 The Reds bounced back from the series-opening loss against the Padres to win last night, 6-7.

Homer Bailey got the start, and he was great through 3 innings of work. Then some dark magic befell him in the fourth and he was out of the game before he could even get the third out. Ultimately he was credited with 6 runs (earned) on 9 hits and 2 walks.

Sam LeCure came in for long relief and put in the next 2.1 innings of work. He allowed 0 runs on 1 hit and 1 walk. Sean Marshall worked the next 2.0 followed by Aroldis Chapman for the ninth, and neither allowed so much as a baserunner. That’s the strong bullpen we know and love.

On the offense, things were gliding along merrily. Chris Heisey led off the first inning with a double and Ryan Ludwick knocked him in four batters later to give the Reds the very early lead. Then they just tacked on more in the bottom of the third: Ludwick hit a 3-run homer and Todd Frazier hit a 2-run shot two batters later.

It felt like a pretty safe lead until the tiki curse caught up with Bailey in the very next inning and it was tied at 6. Fortunately, Brandon Phillips contributed a solo shot in the seventh, just before the left-calf strain he’s been battling pulled him out of the game. He’s expected to be out no less than a few days. Good thing he got his turn to be hero over with.

Phillips injured in win over Padres

Last Game
The Reds got off to a 0-6 lead in the third inning, but then let the Padres tie it back up in the top of the fourth. Luckily, the relief pitching was on and Brandon Phillips had one more solo shot to contribute in the seventh. Final score: Reds 7, Padres 6.

Next Game
If the Reds can win tonight, they can ensure no less than a split of the four-game series against the Padres. Bronson Arroyo (RHP, 6-6, 3.76 ERA) was pretty darn great the last time he faced the Padres (he pitched a 3-hit shutout complete game), and also in his last outing against the Rockies (he put in 6.2 innings of shutout work). Tonight he defends against Kip Wells (RHP, 2-3, 3.82 ERA). First pitch at 7:10 p.m.

Injury Bug
Catcher Devin Mesoraco left the game last night in the seventh with dizziness. It was purportedly caused by getting overheated, and reports say he seemed OK after the game. Get that guy some Gatorade and move on.

More disconcerting: Brandon Phillips left the game last night in the eighth with a problem in his left calf. You may recall him leaving the Rockies game a couple days ago with trouble in the same place. At first it looked like a mild strain, but now it looks like it might be something more serious. We don’t have details yet, but I wouldn’t expect to see BP in the line-up for a few days.

If the Reds can go 12-3 without Joey Votto, hopefully losing Phillips won’t cause them to crumble. It’s about the pitching keeping up their end of the bargain and the offense continuing to share hero duties on a nightly basis.

What to Say to Sound Smart at the Water Cooler
The Washington Nationals lost last night, so now the Reds are in sole possession of the best record in Major League Baseball: 62-41

Posted in Daily Briefs.
Comments Off on Phillips injured in win over Padres