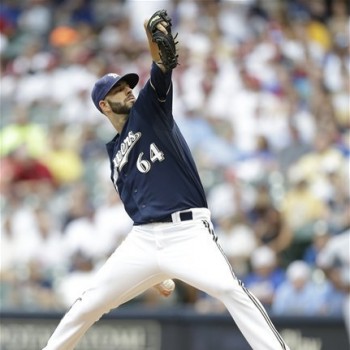 Last Game
The Reds extended their losing streak to 3 last night. This time it wasn’t the starting pitching: Cueto gave up the 3 runs over his 7.0 innings of work, but that usually wouldn’t be a problem for this offense. Last night though, only Zack Cozart, Ryan Hanigan, and Xavier Paul could muster so much as a single hit against the Milwaukee team.

Oftentimes I’ll watch a game where the Reds are behind, and I’ll still feel like the Reds might bust out at any minute. Not so last night. Last night I felt lucky that Brandon Phillips hit the sac fly to put the Reds on the board at all.

Next Game
This afternoon the Reds wrap-up the 3-game series and try to avoid the sweep. Mat Latos (RHP, 10-3, 3.94 ERA), who is coming off a super outing last Friday, takes on Randy Wolf (LHP, 3-8, 5.57 ERA). The Gameday page says Wolf hasn’t won a decision in his last 16 starts, so this is certainly the best chance the Reds have. If the offense doesn’t wake up, though, Wolf may be due.

In addition to his unreal pitching, Chapman has also had one of the more newsworthy seasons in baseball.

Is Chapman a Cy Young Pitcher?
Gregg Doyel, columnist at CBS Sports, has a piece out today starting a campaign to give Aroldis Chapman the Cy Young award. By his reckoning, it’s not Chapman’s performance that is keeping him out of the sportswriters’ minds for the award; it’s just the fact that he’s not a starter. He addresses in turn the three major objections voters are likely to have:

I wish Doyel the best of luck in his campaign, as long as he doesn’t split the vote between Cueto and Chapman and end up letting someone dumb win.