The Hardball Times is today celebrating the 10 year anniversary of one particular inning of infamy for Jason LaRue. This was before the days when “Jason LaRue” was synonymous with “career ended by Johnny Cueto’s boot to the head.” (Though, frankly, his career was already over, and I suspect all that hype was a machination of Tony LaRussa.)

But that’s neither here nor there. No, this post is about LaRussa committing the heinous act of three passed balls in a single inning when catching knuckleballer Jared Fernandez:

Two pitches after the walk, a knuckler got away from LaRue for a passed ball. Williams went to second. On the very next pitch, it happened again. Williams scooted to third and LaRue now had three passed balls on the day – and it was still just the first inning.

You’ll want to read the whole post on The Hardball Times. It’s a nice narrative. Plus it contains lots of other Reds-related anniversaries and day-versaries to satisfy your inner history geek. 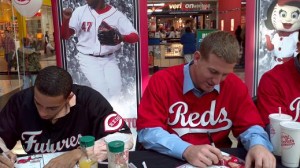