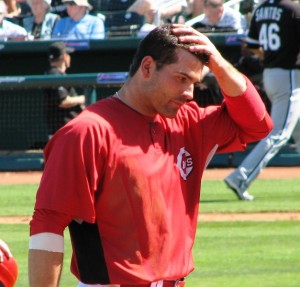 Eight is the magic number of runs to score to win so far in this Reds-Cardinals series. St. Louis scored 8 and won the first game, and the Cincinnati Reds scored 8 yesterday to win the second of the three-game series.

Mike Leake started for the Reds against Jaime Garcia, in what looked like a wild mis-match in favor of the Cardinals. It didn’t turn out that way.

Leake wasn’t at his best, getting hit pretty hard, but he had a stellar defense behind him and was able to limit any damage from the 10 hits he allowed. He picked up his 6th win, pitching 6 2/3 innings, allowing 2 runs on 10 hits, walked none, and struck out 3.

By the time Leake left the game, the offense had the game well in hand. The bullpen did their part, too, though with Jonathan Broxton and J. J. Hoover both pitching scoreless innings. It may have been Broxton’s best outing as a Red, as he struck out 2 of the 4 batters he faced. He might be settling in to that 8th inning set-up role.

On the offense, the main heroes were Brandon Phillips and Jay Bruce. Phillips went 3-5 with 2 RBI and 2 runs scored. Bruce went 1-3 with a walk, but that one hit was big. Just seconds after Marty Brennaman complained on the radio about Bruce’s inability to hit left-handed pitchers, Bruce launched a no-doubt home run off of left-handed pitcher Garcia to give the Reds a 3-run lead they would not relinquish.

The Reds go for the series win today when Homer Bailey goes against at Adam Wainwright 1:10pom EDT.