I know what you've been thinking: sure, technology has given me the microwave and the digital watch and the lifesaving organ transplant I needed at birth, but when is it going to come through with an application that uses a photo of me to say which celebrity I look the most like?

Well friend, your wait is over. Thanks to the good people at MyHeritage, face recognition software is now available to “Find the Celebrity in You.” So, of course, the first thing I did is run some of my favorite Reds photos through to see what came back.

Bronson Arroyo's #1 match was Sophia Loren. I think he ought to try the eyeliner; I think it would be a good look for him. 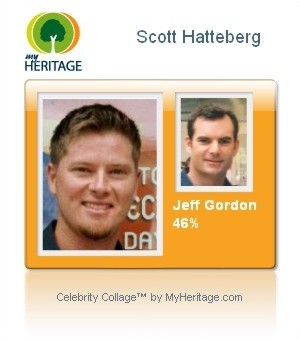 Did anyone else see the thing on the FSN pre-game where Kent Mercker asked all his teammates who spent the most time in front of the mirror, and they all said Scott Hatteberg? Perhaps, then, it's fitting that his best celebrity match was racing heartthrob Jeff Gordon. 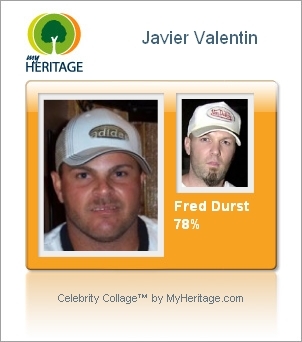 Javier Valentín probably only really looks like Fred Durst with that hat on, but I think he always wears it, so there go you. 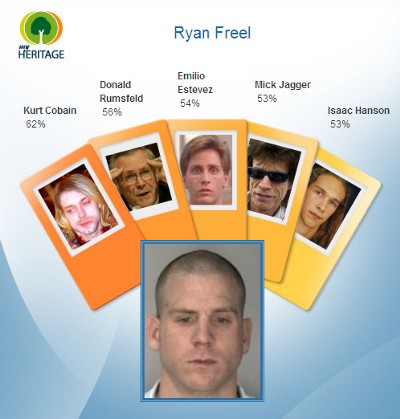 Ryan Freel's mugshot comes up looking the most like Kurt Cobain, but I like the Hanson boy myself. Mmm-bop!

I'm not for sure, but I think tonight might be the night my tiny little segment appears on Ken Broo's show. So tune in for Sports Rock after the 11 o'clock news on channel 5 tonight, if you're in the Cincinnati-land area and let me know how I did.

And, much like my first podcast, expect my first television appearance to be rough. It's hot and nervous up there in front of the cameras.

If you're a first-time reader who found your way here after catching the show tonight: welcome! It's always a pleasure to greet die-hard Reds fans who are willing to look past my on-air stuttering for a little baseball-related amusement. I'll see if I can't get something posted here for you momentarily.

Posted in Random Ramblings.
Comments Off on The Big TV Appearance

Aurilia in Red Not a Sure Thing

Per the story Aurilia open for a Giants return from today's San Fransisco Chronicle, Rich Aurilia says he isn't sure whether he'll exercise his half of the $2 million option for 2007 with the Reds. He says he had a lot of fun in San Fransisco and wouldn't mind going back there.

The article goes on to mention how coincidental it is that Aurilia learned to play first, second, and third base in Cincinnati, and those positions just so happen to be question marks for the Giants next season. And despite an earlier comment about making the team younger, managing general partner Peter Magowan isn't prepared to go all youth-movement on us:

“When we say we're going to get younger and healthier, that's' on an overall basis,” Magowan said. “That will not prevent us from signing a player or two that fit the exact profile we have essentially been signing the last four, five years, who are elderly, good players at the tail end of their careers, but we think can have a place on our team. It's one thing to have one or two of those guys. It's another to have seven or eight of them.”

I know this isn't anything worth panicking about, but ACK! I'm panicking! I'd totally miss Richie. What other player's wife could I get to call in to the podcast??

A Carpenter’s Work is Never Done

The Cardinals are about to send out Chris Carpenter for his second appearance in the short series with the Padres. Looking ahead, it sorta makes you think that even if they can manage to dispatch San Diego tonight, they'll have a tough time with the Mets, seeing as they won't be able to start out the series with their ace.

Now, I'm not one to praise the managing prowess of Tony LaRussa, but I think he's got it right. They can't be worrying about New York yet, right? One series at a time. On game at a time. One inning at a time.

Posted in Random Ramblings.
Comments Off on A Carpenter’s Work is Never Done