Baseball Coffins to Hit Stores in 2007 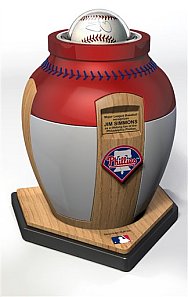 Major League Baseball has struck a deal to put team logos on caskets and urns. Starting next year, the dearly departed fans of the Yankees, Red Sox, Tigers, Phillies, Cubs, and Dodgers can spend their posthumous existence entombed in their team colors.

Each urn will be stamped with a message saying Major League Baseball officially recognizes the deceased as a lifelong fan of that team.

If the pilot project goes well, they could expand to include more teams. If waiting for the next Reds' World Series wasn't enough to keep you going, hanging on for the availability of a Reds-themed final resting place certainly is.

Go read the story on ABC News. You can also check out Eternal Image, the company that will be making the coffins and urns. Among their other themes are Precious Moments, and the urn is just a disgustingly cute as the little figurines your aunt collects.

I Like It Because It Would Make Bronson Jealous

So Fire Brand of the American League wrote up a lengthy discussion of the benefits of Boston acquiring Adam Dunn, including making room for the right-handed bat of Kevin Millar.

And, since the author is committing a total blog foul in leeching my bandwidth by placing a photo from RHM on his own site, I think I'll do a similarly heinous thing and repost his article in its entirety. Though it's not really that heinous, since I'm at least including a link to the site. SOME of us have manners.

Like I said, the article is lengthy, so I'm putting it below the fold.

UPDATE 10/26 -- The author of the article, Evan S. Brunell, was nice enough to write and let me know that weasin' my bandwidth isn't actually illegal while my reposting his article is. So if you want to read it again, you'll have to follow the link.

Posted in Wheeling and Dealing.
Comments Off on I Like It Because It Would Make Bronson Jealous